Other than the Great Barrier Reef, the other thing that comes to mind about Australia is the Sydney Opera House. So on our way to the South Island of New Zealand, we had a long layover in Sydney. To stretch out legs after a few days on the boat, we took the stroll around the waterfront and see that opera house. 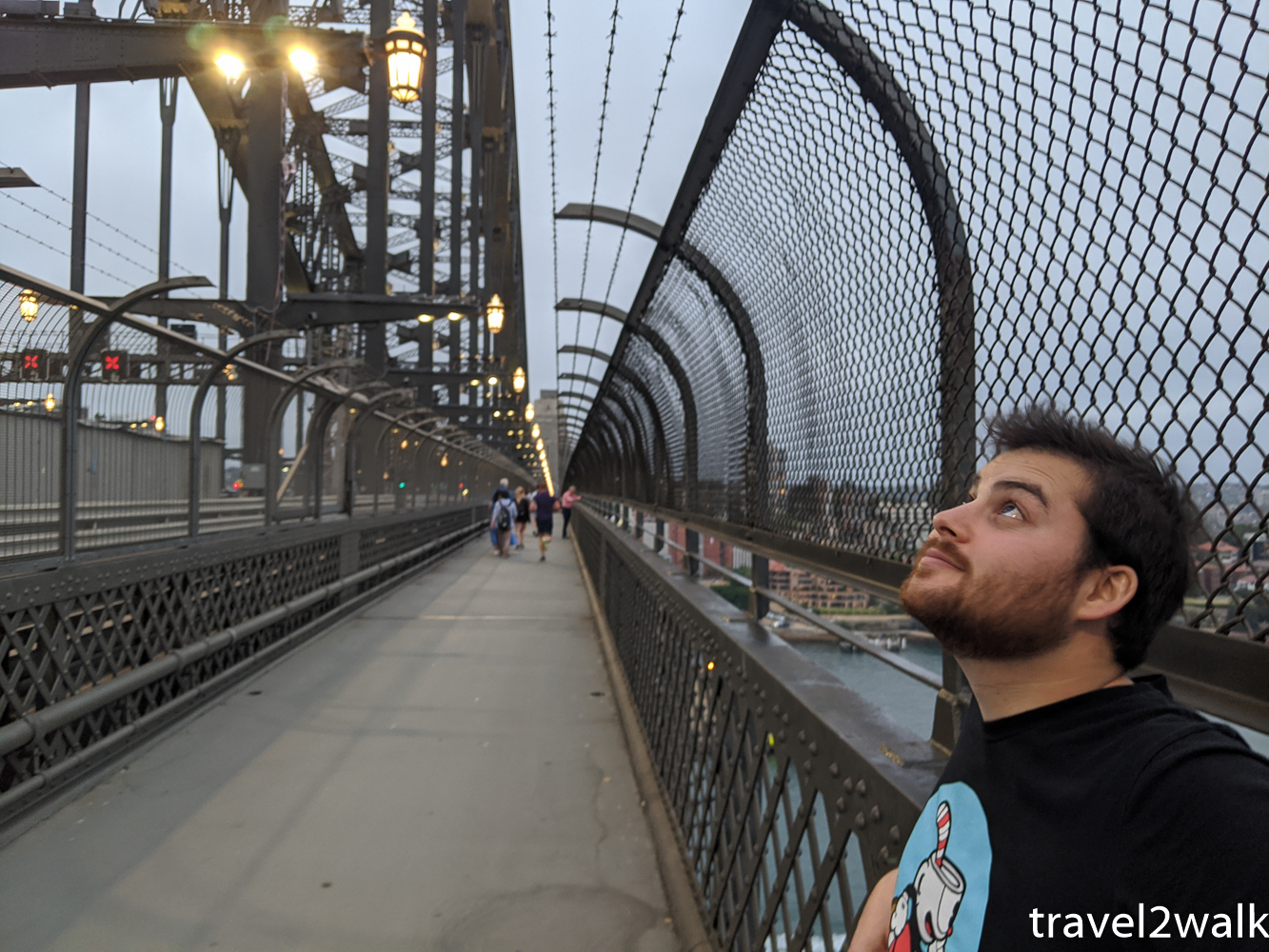 This is the fourth entry of our Australia and New Zealand trip series covering our brief stop in Sydney on our way to  the South Island of New Zealand. You can navigate to the other parts in the index below as they are posted.

Our trip picks up after returning to Cairns from our liveaboard. 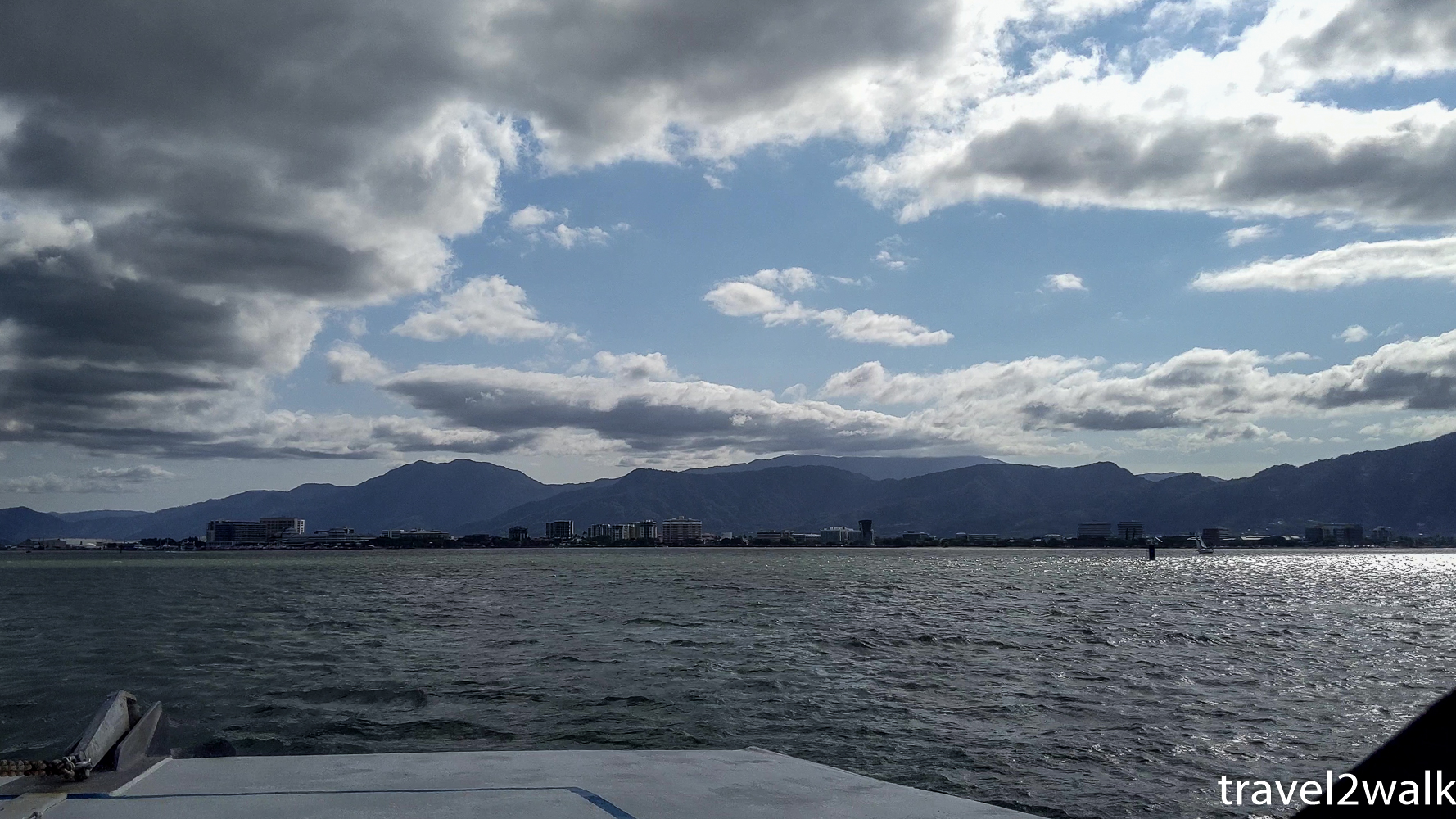 We picked up our stored luggage from our previous hostel and checked into the Hilton Doubletree (see discussion of Cairns earlier). We had to plan a night stay as part of diving and safety since we were still within our 18 hour post dive no fly window. But that gave us an evening to meet up with our new friends for one last night of drinks and dinner.

Before our flight the next morning, it was laundry time and catching up on the world. The well stocked breakfast and coin laundry facilities made it a nice lazy morning. Pretty soon, we were on our way to the airport for our flight into Sydney. Our booking was from Cairns (CNS) to Christchurch, New Zealand (CHC) with a 15 hour layover in Sydney (SYD). This was not a cheap flight being directly after New Years. Our first leg of the booking was on Qantas metal in a Boeing 737 with 3-3 economy class configurations. It was uneventful and they fed us a meat pie for lunch. 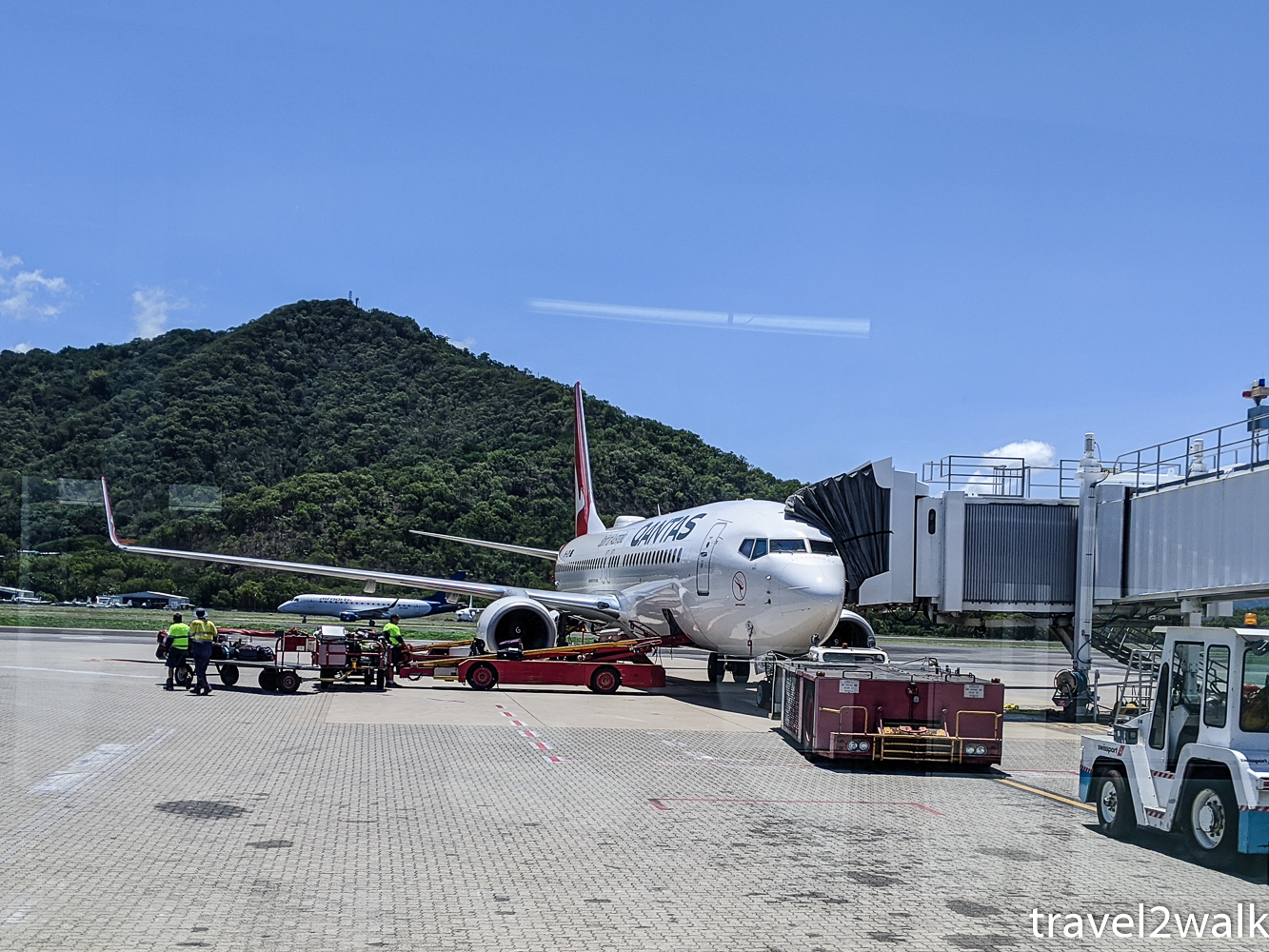 What was noticeable at the end of our flight was haze from the disastrous wildfires that kicked off the year 2020 (wikipedia), bet you forgot about those at this point.

For the very short time I spent in Sydney, it seemed like a place I’d want to return to to explore further. We landed mid afternoon and my parents, also vacationing in Australia, met us at the airport. After Ubering to our lodging for the night and dropping of our luggage, we took public transportation downtown.

Public transportation (NSW) was very convenient to use with the Opal card or just any contactless payment like my Google Pay. The tram took us from an area of newer high rises to an older neighborhood with a mix of buildings that reminded me of both the French Quarter in New Orleans and older areas of Chinese cities. Finally at the end of the line was our destination was downtown and the waterfront. Walking past the wharf terminal, we entered the crowded path leading to the Sydney Opera House.

We took a lap around the opera house checking it out at all angles and finding much more open space for ourselves.

We didn’t enter the Opera House, but instead decided to walk over to the Sydney Harbor bridge. It wasn’t the easiest to navigate there, but the view was worth it.

By the time we left the bridge, the sun had gone down and we were looking for a place for dinner. With Chinese parents, that also meant looking for a chinese restaurant. We headed for chinatown and ended up at the Gold Century (tripadvisor) for a seafood dinner. We were starving at this point and the food there hit the spot. We were out once we took the bus back to our housing.

While I only had one day in Sydney, Mark spent a few extra days here before our diving adventures. He spent a bit more time walking around the downtown area, including Hyde Park and the Botanic Garden area (The Royal Botanic Garden).

He had some local birds to keep him company.

Mark did get out of the city on a couple of occasions. However, his visit to the Blue Mountains (wikipedia, A Happy Passport) was dampened by the smog for the bushfires.

At least there were some waterfalls.

His other adventure out of town adventure was out toward Manly via the ferry to visit the rugged coast and beaches.

Places I’ll have to visit the next time I’m back in Australia.

We woke up early next morning to catch the second leg of our flight from SYD to Christchurch on the South Island of New Zealand (CHC). We waited for breakfast at the airport since there were a couple of restaurants including in the Priority Pass network (via my credit card, see details at Dr of Credit), meaning we were in for a good amount of free food. Planning ahead, we hit up Better Burger for a couple of burgers (seat2asuite) to takeaway for lunch since we had AUD$36 per person to spend there. The burger were surprisingly good for an airport burger. Then we headed over to the Peroni Bar near our gate for our actual breakfast, again with AUD$36 per person. Sometimes, it’s actually hard to use up all that credit. 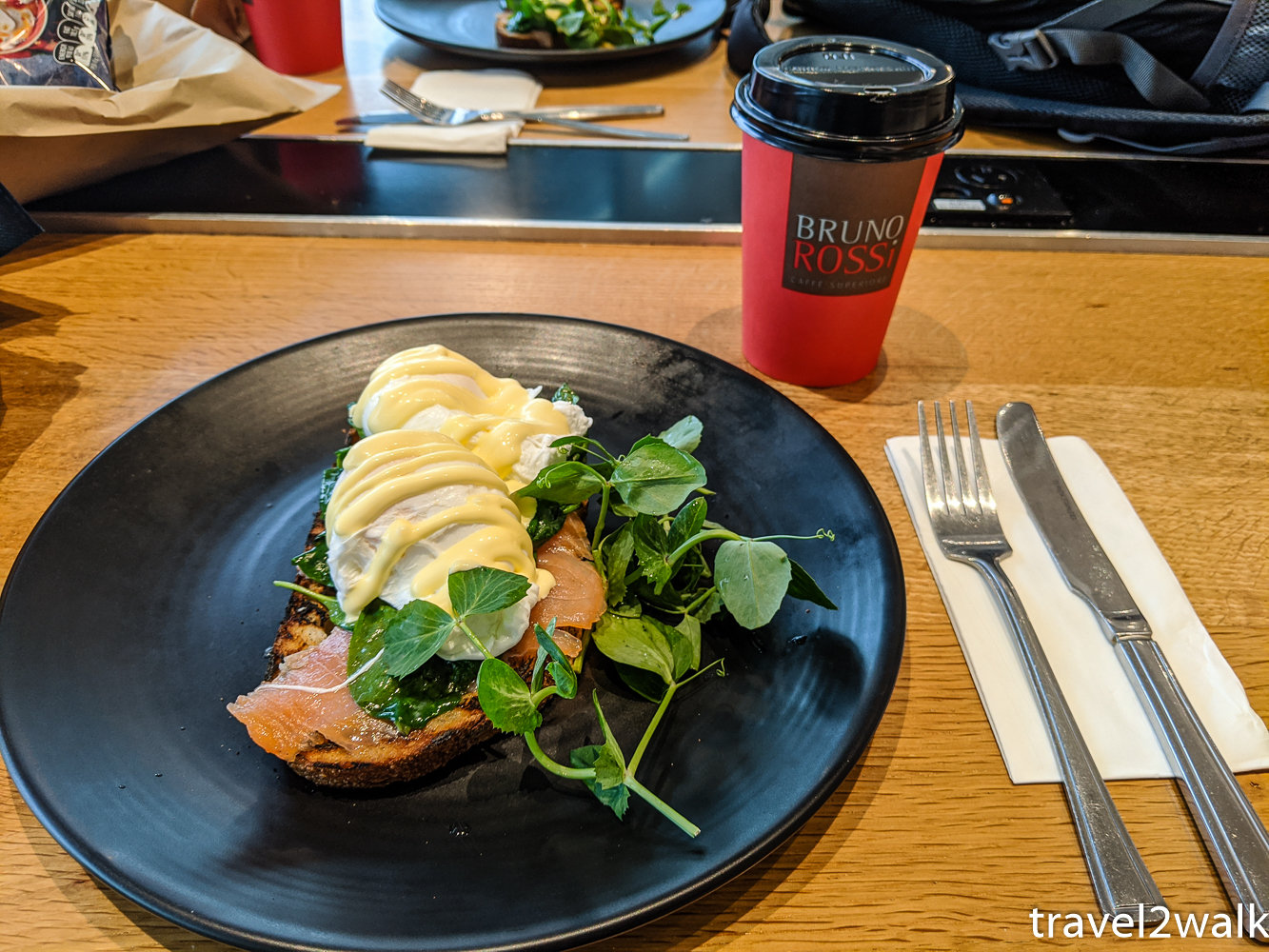 Our flight was on Emirates metal and was a fifth freedom flights on their Airbus a380-800, but we were in economy rather than the first class apartments these were known for.

The economy class was a 3-4-3 configuration and still plenty of space in comparison to the economy were used to. The huge screen and service were also an enjoyable touch. 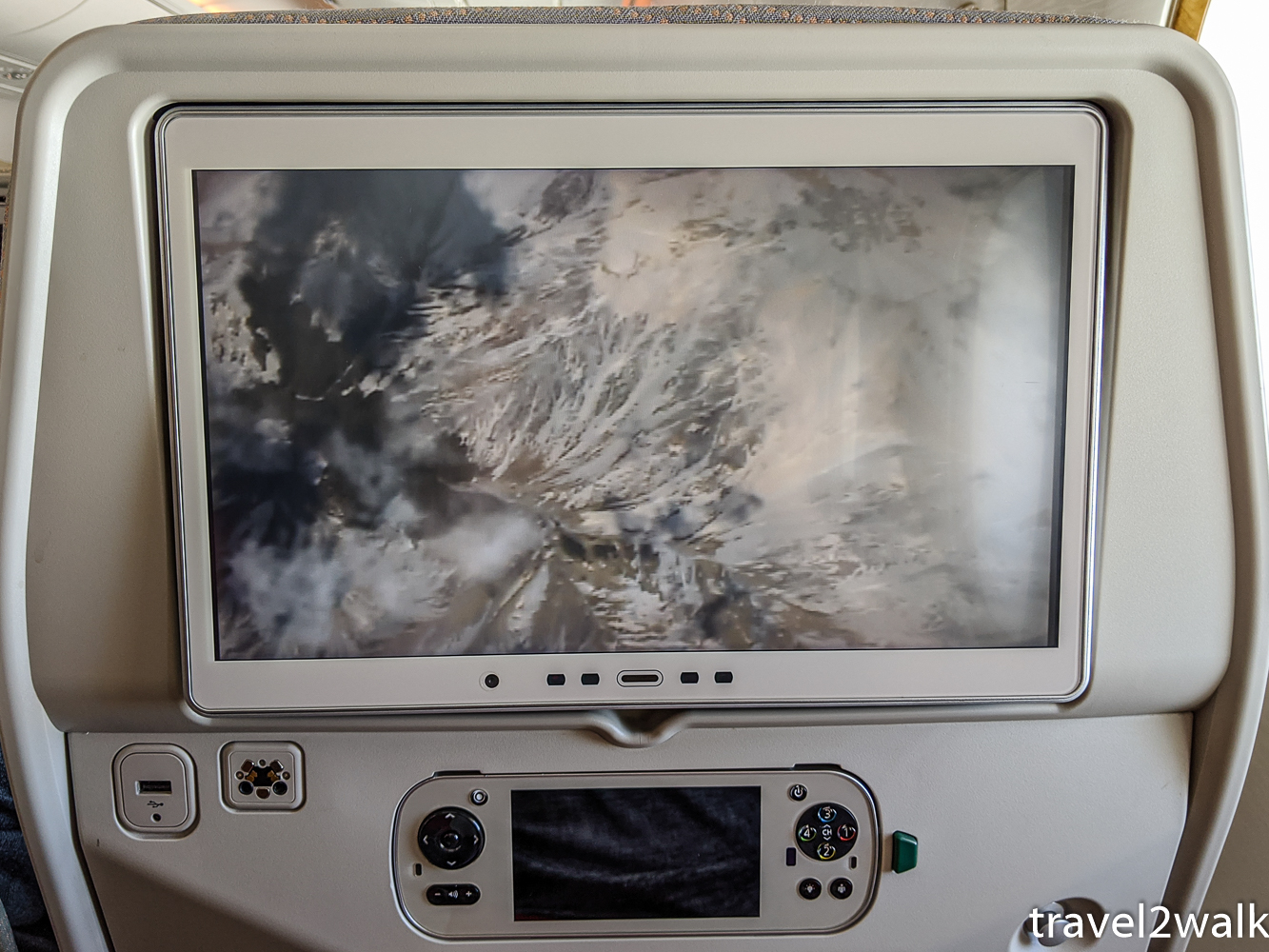 Once we arrived in CHC, the immigration was very quick but customs took a while as they are very stringent on preventing invasive species. Having been through it before, I had washing all my hiking gear, including shoes, before I left home. When it was my turn, I had little trouble going through customs. Mark on the other hand took about a good half hour as they had to check his luggage for Stink Bugs, which is very prevalent in Western Virginia.

That did give me plenty of time to pick up our Toyota RAV4 rental and we were off. Well, off slowly as I needed a second to reorient to driving on the left side of the road.

Leaving from Christchurch, our destination for the night was actually undecided. We set the gps for Queenstown but didn’t know if that was going to be our final destination. We had discussed the possibility of staying with the current theme of the trip so far, scuba diving, but this time in the frigid waters of Milford Sound. It was something Meg and I tried to do last time around, but were rained out. After a call to Simone at Descend Diving (tripadvisor), we were informed that they were full for the next day. However, they would let us know if anything opens up.

The first couple hours took us through some farmland and pastures. The later of which reminded me a little of Ireland with the rolling hills. Then we started to see a few snow covered mountains poking up from the hills. Pretty soon, they were accompanied by a large teal body of water, this was Lake Tekapo.

There was a small town here and where we picked up a hitchhikers looking to head south. He was on a work and travel visa and was heading down south to go fruit picking on a farm. We continued on until we saw the next teal lake, Lake Pukaki. We had to stop at this one to look around. At the rest stop, there were plenty of Lupins in full bloom. However, they are an invasive species here in New Zealand (The Guardian).

In the distance we could also see Mount Cook, however that adventure will have to wait. 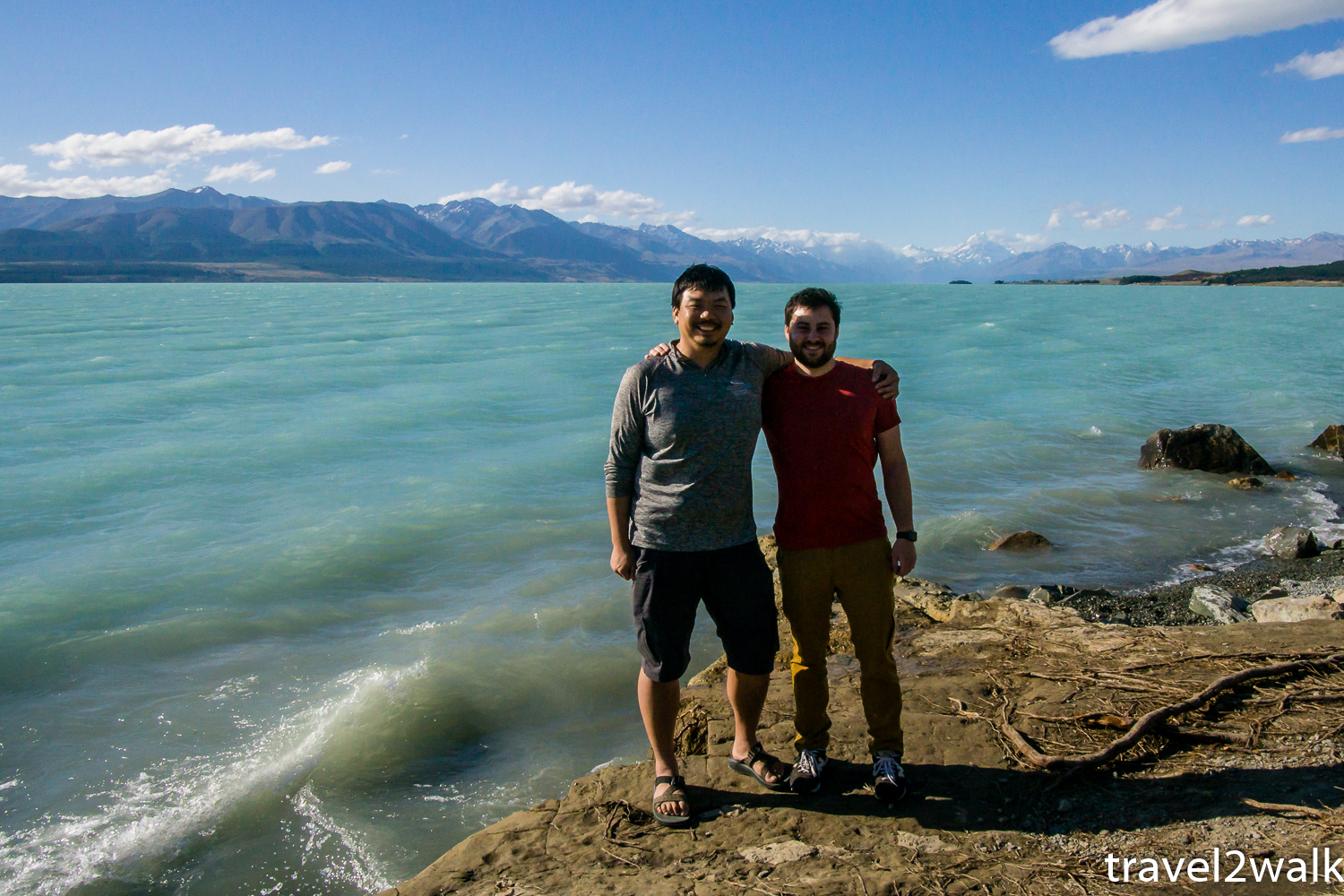 We continued south on the windy road over Lindis Pass and through the hills.

We dropped off our hitchhiker near the town of Cromwell as we turned west to head toward Queenstown. We were also getting hungry, so we stopped by the local New World for some groceries. That included some smoked salmon for sandwiches we’d have for dinner. When we on the outskirts of Queenstown, Simone from the dive shop called us back and said a couple people dropped so we were good to dive if we can make it to Milford Sound in the morning. Even though the sun was down at this point, our day continued on since Queenstown was still about 4 hours away from Te Anau or the gateway to Milford Sound.

We ended up driving further past Te Anau since I knew there were car camping spots along the road. The first one we saw was the Henry Creek Campsite (DOC, google maps) for NZD$15. It was very late by the time we arrived and everyone was pretty much asleep. So we put down the back seats in our RAV4 and were out quickly as well.

Up next, we visit Milford Sound from a different perspective.

return to the index / continue to next post of this series

So please consider looking at options to support us so we can get more content out to you.

back to trip reports

Monongahela National Forest, West Virginia - 2021, Oct 17. Our new family member hit the trails for the first time this weekend. Babou is a natural, but was distracted at times like these small caves formed by the boulders in the Allegheny Mountains.
Monongahela National Forest, West Virginia - 2021 Oct 16. We checked out the view from Chimney Top down the North Fork Mountain Ridge amongst the Allegheny Mountains on a moody weekend day. The foliage is starting to come in on the north facing sides of the mountain at higher elevations. Peak season is yet to come.
Hurricane Mountain, New York - Oct 2020. Sometimes you just have to take a chance in the face of temperament weather. The clouds may lift for you just as you come to the viewpoints. Well, after raining on you the entire way up that is. This was our 2nd hike in the Adirondacks last year during our week podding with Vru and Mat. You can find our full report at https://travel2walk.com/2021/10/10/trip-report-new-york-hurricane-mountain-october-3-2020/ or link in profile @travel2walk.
Lake George, New York - Oct 2020. It has been a year since we visited Mat & Vru and took Zoey up Cat Mountain. She asked us why there isnt a dog mountain, which obviously would be so much better. While we didn't doubt that, the sweeping views here overlooking Lake George with the leaves changing wasn't bad either. You can find our hike report via link in profile @travel2walk or at https://travel2walk.com/2021/10/01/trip-report-new-york-cat-mountain-october-2-2020/
Muir Woods National Monument, Sep 2021. Despite the high rental cost, Mark's new digs is actually pretty spacious. Also pretty nice for a 1000 year old place.
Golden Gate National Recreation Area, 2021 Sep. Mark by the Bay. Seeing @markaorloff off to California, may this be the first of many adventures you have on the west coast.
Glacier National Park, Aug 2021. Not every moment on our trip was hazy or raining. We had a perfect 3 hours of sunshine on our last day. It was still worth the last minute quick getaway for the views we had, catching up with old friends @outdoorhiker15 & making new ones.
Glacier National Park, Aug 2021 - Through the clouds, the door in the mountain finally started to take shape. While this wasn't the way I imagined seeing the Ptarmigan Tunnel, the scene seemed to be straight out of an adventure movie.