Over the course of just over a week, we racked up a bill that rivals some of our longest trips and by far exceeded our cost per day than any we’ve done before. That’s not even counting the point redemptions used and the amount we save through the travel enthusiast game. In the end, we were indeed left with an unforgettable experience. Some of which I am good with not return to, such as the resorts on Bora Bora. While others I would love enjoy again, like the underwater wonderland at the passes on Fakarava.

This is the conclusion of the French Polynesia trip series. You can navigate to the other parts in the index below as they are posted.

When you visit Bora Bora, the picture you typically have in your mind is a relaxing time on a beach or resort with a view of Mt. Otemanu. To meet those expectations, there isn’t a cheap way about it since any place on the isolated atoll island ring is bound to be very expensive. So if you have those expectations and are willing to spend the shiny coin (or are willing work really hard to get the points), then Bora Bora will fully meet your expectations and some.

Ofcourse, there are much cheaper hotels and resorts on the main central island at Bora Bora with access to much cheaper amenities.

However, they will likely fall short of expectations making the experience not as enjoyable. If you don’t care for the view, then you really don’t need to spend the extra dollar to get to Bora Bora. I’d recommend to check out one of the many other islands, like Fakarava.

Bora Bora is the definition of a tourist island with so many resorts and seemingly everything is catered toward the many tourist that visits the island. In that regards, we enjoyed our times at the St. Regis and InterContinental Thalasso tremendously and there isn’t a hotel I would stay at for the purpose of enjoying the hotel. After experiencing that life, I am pretty sure visiting the resorts on Bora Bora might end up being a one time thing for me.

Specifically, our preference during our travels is to partake in activities and sitting on a beach just isn’t really our thing. We tend to get bored, and one of us tend to get very burnt, if we are left on the beach too long. This blog isn’t call travel2sit afterall. From that perspective, I can understand why many backpackers call the island “Boring Boring” because the activities are limited and those that do exist are not accessible for cheap or  might not rate among other places.

To that respects, here is how I would rate the diving.

For reference to my rating scale for diving, it would follow my “view/experience” rating I use for hike. Here is a the full explanation of the 1-5 scale.

view/experience: 3. My favorite dive here was our 2nd dive at Tapu where we piggy backed off the snorkeling boat feeding the sharks. Seeing the large Lemon sharks were the highlight of the diving here. I don’t particularly like activities involving feeling wildlife so it’s not a dive I’d be traveling back to Bora Bora for, hence the 3 rating.

It was the only dive of the four we really were able to see cool critters, which is my favorite part of diving. The coral on Bora Bora wasn’t too interesting either since plenty of it was wiped out by a cyclone within the last 10 years. I thought about rating the other dives other than 2nd one a 2, but we might just have been unlucky with what swam by. The visibility for most of them were good to decent.

The island of Fakarava in the Tuamotu Archipelago was much more our style. There were much less people with plenty of nice beaches. The locals on the island were very friendly and if I played any soccer at all, I’m sure I’d been welcomed in their local pickup games in the center of town. To travel about the majority of the island, you can simply hop on a bike and peddle your way there on the one road. Though there isn’t much you can go to other than some unspoiled beaches, which is probably what you were looking for anyways. So, if you are looking for a low key island life, you need look no further than Fakarava.

The island is still quiet expensive seeing how it’s in the middle of nowhere without much traffic coming and going. Camping for 1 person for 1 night was still around USD$35, though it’s more like the hostel experience.

The resorts are much cheaper still in comparison to Bora Bora and has as much beach and activities as you want. So as I was describing earlier, if you don’t care for the views that come with Bora Bora, consider visiting these other islands.

Our main reason for visiting though, was to dive and see the wall of sharks. In that, the island did not disappoint.

view/experience (explanation): 4. The north path isn’t known for the wall of sharks, but we saw plenty of grey sharks during our dives. The thing that really sticks out about the dives here is how amazing the visibility is. Among the different critters we saw, the best were the swordfish, moray eel, pufferfish, white tip reef sharks, and many grey sharks.

view/experience (explanation): 4. If I ever give out a 5 rating for a dive, this would be it. The wall of sharks is indeed impressive covering your entire field of view. As I mentioned in my trip report, all the sharks lined up against the current seems like a massive armada of starfighters in formation it gets ready for an attack. Even for our dive drifting from the lagoon to the ocean during low tide was phenomenal in that we swam through a pod of sharks. We also saw some eagle rays and a few napoleon wrasse. Of Course the visibly was also incredible here.

Having visited 2 of the several islands in French Polynesia, future trip focuses would be geared toward diving destinations. For instance, I would have a higher preference for the Rangiroa atoll and return to Fakarava of the Tuamotu Archipelago. Additionally, I would like to explore the Marquesas Archipelago and the Australes Archipelagos as well. To visit these separate island groups, I’d look to take even better advantage of the Air Tahiti multi-island passes (Air Tahiti).

A little part of me kind wished we took a couple of days from Bora Bora on our last trip and instead had a free stop on Rangiroa as part of our multi-island pass. But I can say that I’ve enjoyed Bora Bora fully and don’t see a strong need to go back.

Lastly, I would like more time on the main island of Tahiti and the neighboring island of Moorea accessible by ferry on our way in or out of the smaller islands. Resort stays here would be much cheaper. Secondly, there are some additional diving options on Moorea and hiking options on Tahiti.

While getting to French Polynesia is cheaper now with competition from budget airlines and added routes from the traditional airlines, staying on the remote islands isn’t so cheap. This is especially true with a visit to one of the resorts on the atoll on Bora Bora. This trip was the highest cost per day for us ever and amongst the most we’ve spent on a trip in total. The total out of pocket cost was USD$6056.54 and we redeemed USD$2305.40 equivalent of points and miles based on Frequent Milers Reasonable Redemption Valuation, though the amount we saved with the points were well beyond that. Getting away with just over USD$500 for more than a week of housing on the islands was a job well done in my books.

The biggest cost for our trip was our scuba diving and related activities. Typically, our activities are lower cost since we typically just walk up a mountain. Our other major expense were the inter-island flights and purchasing a portion of the points needed for our award flight redemptions.

Other than that, the typical costs were all higher due to the remoteness of the islands including even loading up on groceries. Full details of our costs are listed as below. 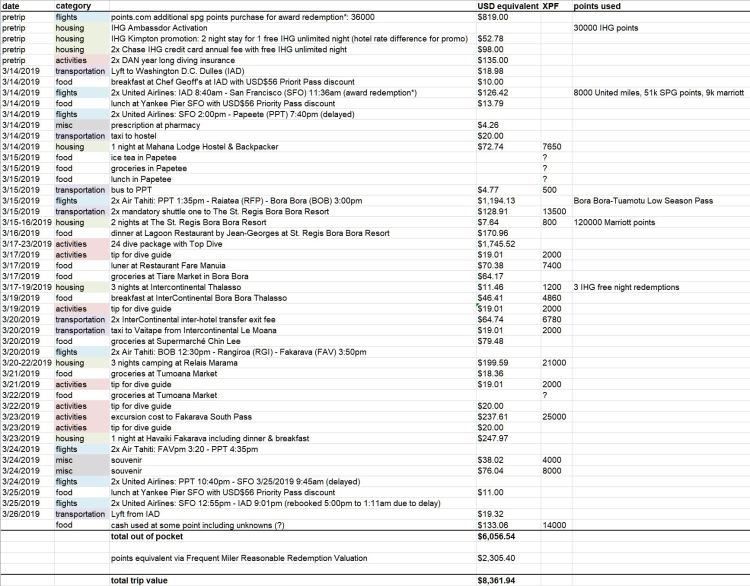 During our trip, we were received USD$200 United flight voucher for our flight delay, 2770 Marriott points, and 13432 IHG points. The valuation of the points according to Frequent Milers Reasonable Redemption Valuation were USD$96.51.

return to the index / back to trip reports 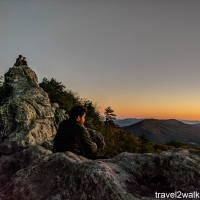 Yellowstone National Park, July 2021. My month long working remote from Wyoming & Montana ended with a trip into Lamar Valley. I guess it's time to start the writing process. In the meantime, here is my brief trip report write up on the backcountypost forum, where I owe much of my research to.
McAfee Knob, May 2021. AT thru hiking season is in full swing. I shuttled a trio of hikers on happenstance for their zero and shared a sunrise with them. You can follow their adventures heading NOBO at @goldi_luks @metal_onthetrail & @carles.barkleyy
New River Gorge, May 2021. The newest national park is known for the bridge across the New River. You can get a great view of it from Long Point.
New River Gorge National Park, May 2021 - We spend the morning checking some cliffs along the Endless Wall hike.
Dragon's Tooth, May 2021 - Flowers are blooming on the Virginia Triple Crown. Rhododendrons and Azaleas can be found along the trail. But still a little early for the Mountain Laurels. The star of the show are a bunch of Pink Lady Slippers, though skippers are probably not the first thing that comes to mind when seeing these orchids.
Tibbet Knob, May 2021 - Different layers of green formed by new spring leaves was our view on our hike with @brianbyrdman, @h_keene_ , et Al.
Riprap Hollow, Shenandoah National Park - Apr 17, 2021. A patch of Bleeding Heart was an unexpected delight on our hike. You can find the full report & video via link in profile @travel2walk or at https://travel2walk.com/2021/05/13/virginia-hikes-chimney-rock-riprap-hollow-wildcat-ridge-april-17-2021/
Riprap Trail, Shenandoah National Park - April 17, 2021. Chasing waterfalls and swimming holes along Riprap Creek to celebrate National Park week (not that we knew beforehand).