Spring had arrived when I headed up to hike Hoop Hole. Flowers were in full bloom at lower elevations around Roanoke, so I decided to go for a hike one Sunday afternoon to see the bloomage on the mountains. Since I was by myself that day, I also was looking to explore something new. Hoop Hole is a well known local hike, but it was one that never really sounded that interesting to me before. Having put it off all these years, it did serve my explore mentality.

There are a couple of options regarding the Hoop Hole trail system.

For a shorter hike, the lower loop (highlighted in yellow in the trailhead map above) can be completed for about a 4 mile loop. The lower loop is the initial trail you start on from the Hoop Hole trailhead.

A longer option is to start from Roaring Run via the estimated 3 mile (one way) Iron Ore Trail (highlighted in white in the trailhead map above) connecting to the upper loop for a total of around 14.5 miles.

I pulled into the trailhead parking lot just before 1:30pm on a gloomy Sunday. There were a few spots for cars, but I was the only one when I first pulled in. When I left another car had parked. It’s safe to say this one isn’t a busy trail.

The trail has a crossing of Stone Run right away. Stream crossings would be the theme of the lower loop.

At the junction for the loop, I decided to hike clockwise, though I would recommend counterclockwise if I were to do this again. This is because hiking uphills facing Stoney Run would provide for a better views of the stream. Directly after I turned left at the junction, there was a small camping area.

The trail was relatively flat for the next mile or so before curving around the hill that the lower loop encompases and descending a little to drop into the Hipes Branch drainage.

Over the next mile, the trail follows and crosses Hipes Branch several times as it gain elevation mildly. As such, the trail was a bit muddy here and there. 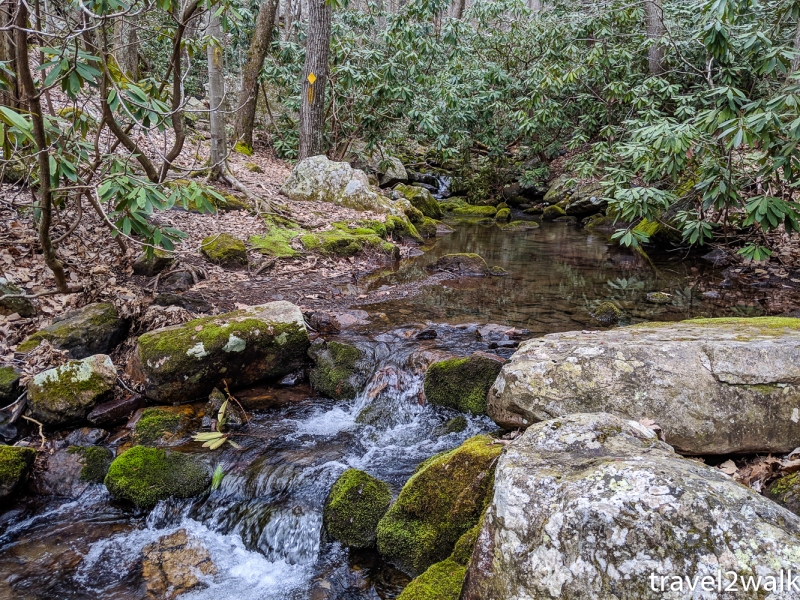 Also along the trail here, I found few swimming holes, fire rings, and campsites with some cool rock formations that line hills. This would make this a cool backcountry hangout spot on a hot summer day. 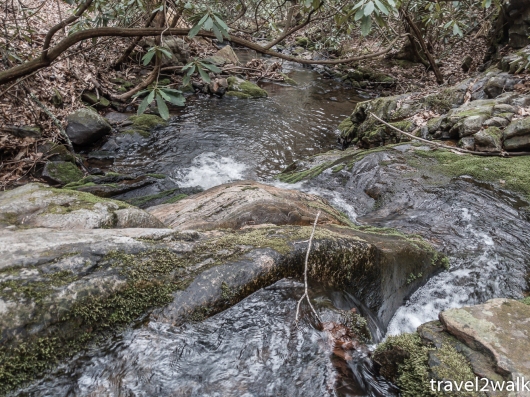 About 2 miles into the hike and after a wooded area, I reached the first of 2 junctions for the upper loop. I took it to continue clockwise around the upper loop as well. 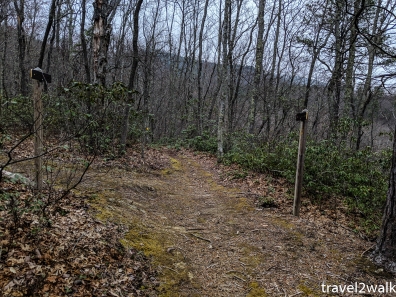 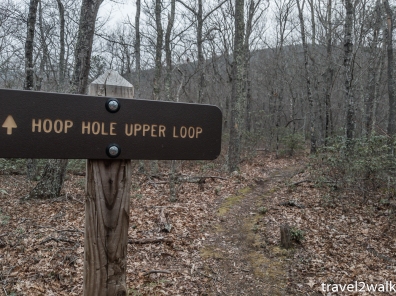 The trail increases in elevation at about the same grade working around Bald Knob. Since the trees were bare, I could still see the hills the lower loop circles around. About another half mile after the junction, I crossed Hipes Branch one last time.

The next portion was pretty cool as the trail continued on a plateau like bump with some openness to it. I imagine this would be a nice view in the fall with the foliage.

The ascent increases in grade a little bit here and the trail turns northeast and starts to work up the side of Rich Patch Mountains ridge up toward the gap between Rich Patch Mountain Peak and Bald Knob. The trail is mostly very loose dirt from this point with a few patches of rocks. There are numerous blowdowns with the roots just pulled out of the loose ground. It does look like some rangers have been through to chainsaw the few that crosses the trail. The loose dirt here is where I started to regret having my backup Chacos (Z/1 Classic Athletic Sandals – a pair that doesn’t optimally fit my foot that I use for everyday).

As I reached the flat area between Bald Knob and Rich Patch Mountains Peak 2 miles after the beginning of the upper loop, I was completely encompassed by the clouds. The small pass here wasn’t anything of interest. 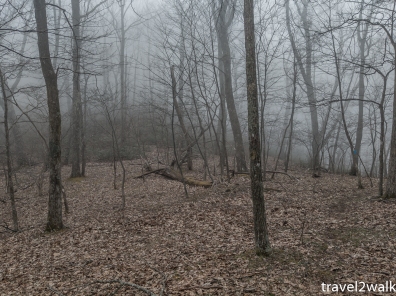 The trail turns left and continues to work up toward the ridge of Rich Patch Mountains for 1/3 of a mile, but just misses the peak. The grade from small pass to the ridge is milder, but still on a combination of loose dirt and rocks. There were reports from Hiking Upwards of many stinging nestles here, but I was too early in the season to see any. But there were some downfall and brush.

The ridge was also in the clouds, so no views for me on this day. On a summer day, I don’t know if you’d see anything either with ridge covered in trees.

For the next mile or so, the trail alternates from continuing on the ridge or going just below it. The first time it drops down from the ridge was just before the peak of Pine Mountain. When it does drop away from the ridge, there are a few large rocks the trail goes over. They can be pretty slippery and I did take a spill on one of them leading to a bit of a nasty cut and a several swear words.

About 2.5 miles from the start of the upper loop (5.5 miles in total), the trail descented away from the ridge through the woods for another half mile until the junction with the Iron Ore Trail. The Iron Ore Trail connects to Roaring Run trailhead and provides an alternative start. 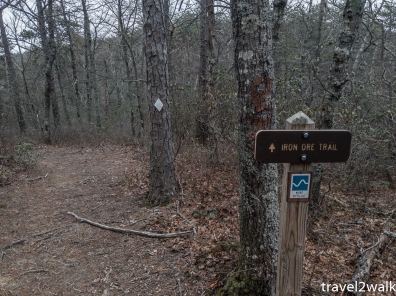 As noted by the signs, the elevation profile from here mellows out for the rest of the upper loop as the trail continues slightly downhills crossing a few streams or dry stream beds through the uninteresting forest. Just before the end of the upper loop after about 5.5 miles from when I started the upper loop (7.5 miles total), there is a large campsite with a stream for water source shortly after.

I was unimpressed with the upper loop and had a pretty low opinion of the hike so far by the time I reached the second junction between the upper and lower loop. I did have a low expectation to begin with, but was disappointed in that there were still very few flowers blooming on my entire hike on this day. The rest of the lower hoop from the junction started to descend more aggressively again as the trail followed Sprout Run the rest of the way. The first of many crossing turned out to be a difficult one as several blowdown completely blocked the trail. I had to find an alternative crossing upstream and bushwack back to the trail. 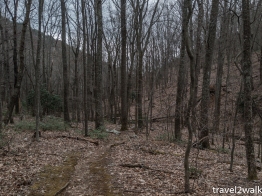 However, the rest of the lower hoop made the hike was enjoyable following Sprout Run. There is just something about hiking next to a stream that makes things alright. The trail typically remained above the stream and I could see a cool campspot on the other side shortly after the first crossing. 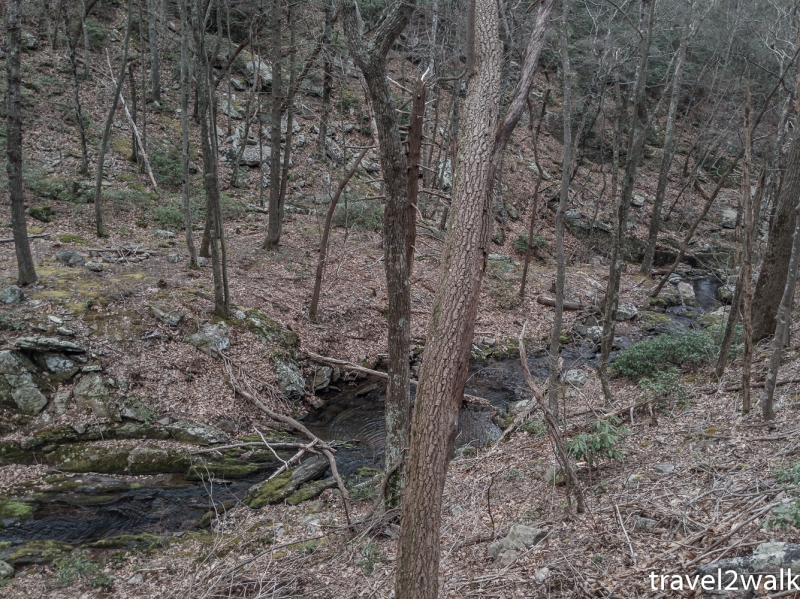 The trail would go back and forth across Sprout Run with several swimming holes that would make this hike appealing in a hot summer day. 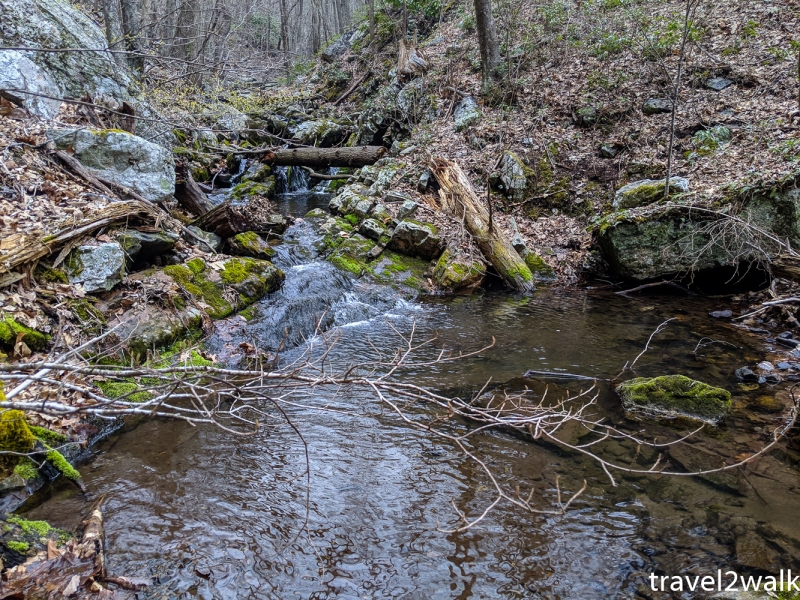 This section definitely made my hike and would the reason I would recommend doing the lower hoop if you are around. 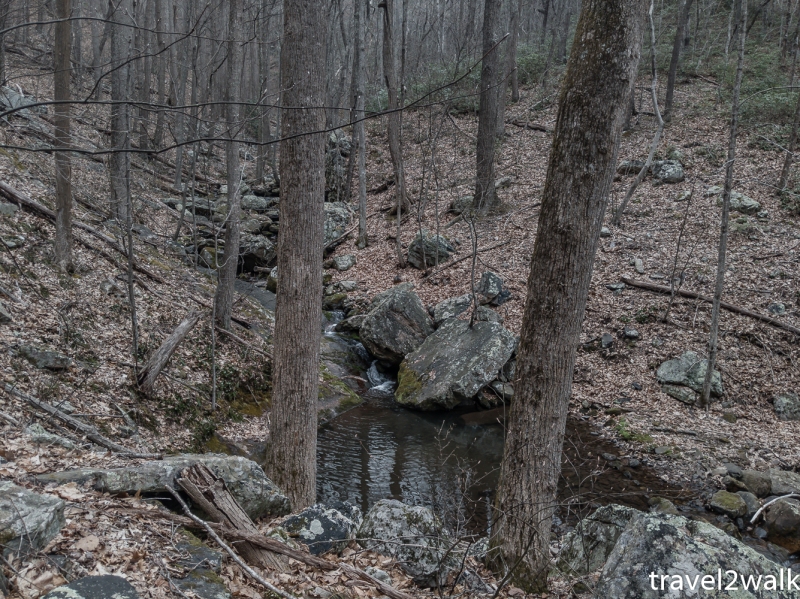 About 8.8 miles into the hike, I returned to the initial junction. 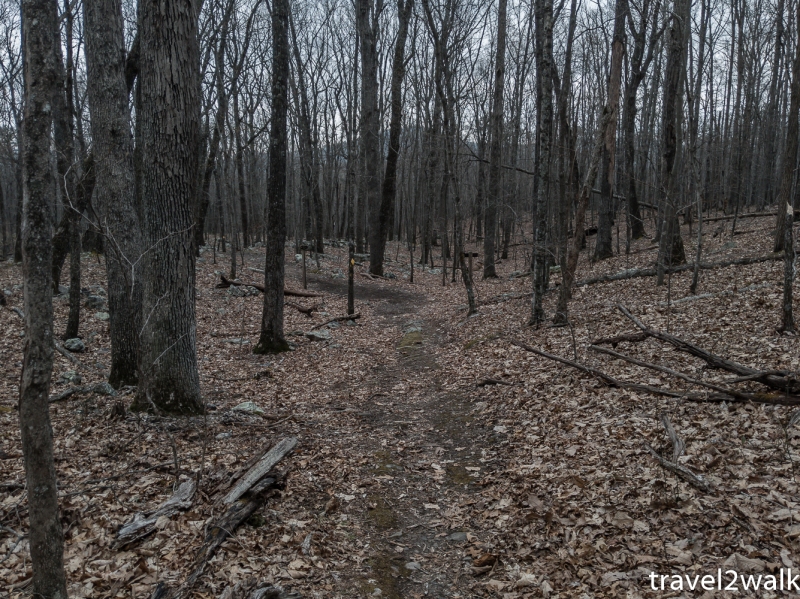 It would be just a few more steps until I returned to my car. 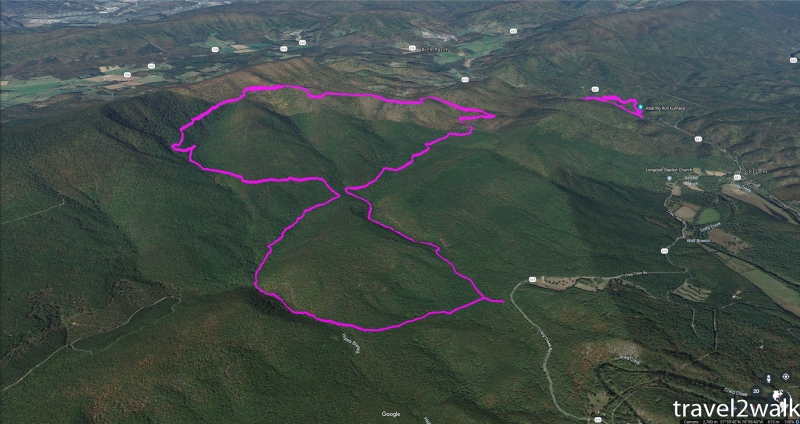 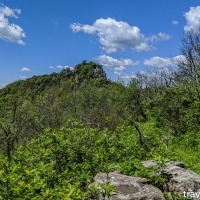