Dragon’s Tooth is one of the 3 peaks of the Roanoke triple crown (Roanoke Appalachian Trail Club) along with McAfee Knob and Tinker Cliffs. It is characterized by the outcrop “tooth” like rock just off the peak of Cove Mountain that can be scrambled upon for a 360 view. It is also known as the most technical of the 3 with a short section of scrambling on the Appalachian Trail near the peak.

There are actually 4 ways from 3 different trailhead that you can used to access Dragon’s Tooth. The most popular and easiest is an in and out from the Dragon’s Tooth Parking Lot on the Dragon’s Tooth Trail that turns southbound on the Appalachian Trail (AT) at Lost Spectacles Gap. This is also my recommend return route for all other starts. Out of the same Dragon’s Tooth parking lot, the spur Boy Scout Trail splits shortly after the trailhead and connects with the AT quickly before continuing southbound. The other ways are starting on the AT at main trailhead parking lots (Trout Creek trailhead on Miller Cove Road VA-620 to head northbound or McAfee Knob Parking lot on Catawba Valley Drive VA-311 to head southbound).

While I hiked this on an overly warm, 78 degree Fahrenheit, February weekday recently for sunset, this is one of those local hikes that I’ve done multiple times in the past since it’s so close. My preferred route and what I hiked last time is to head up the Boy Scout Trail and returning on the Dragon’s Tooth Trail after summiting. However, I hiked down in the dark on my last trip since I was catching sunset. Rather than describing the exact hike of my most recent hike exclusively, I’ll cover the most popular and easiest way up first and then I’ll follow up with the alternatives using pictures taken across the years. 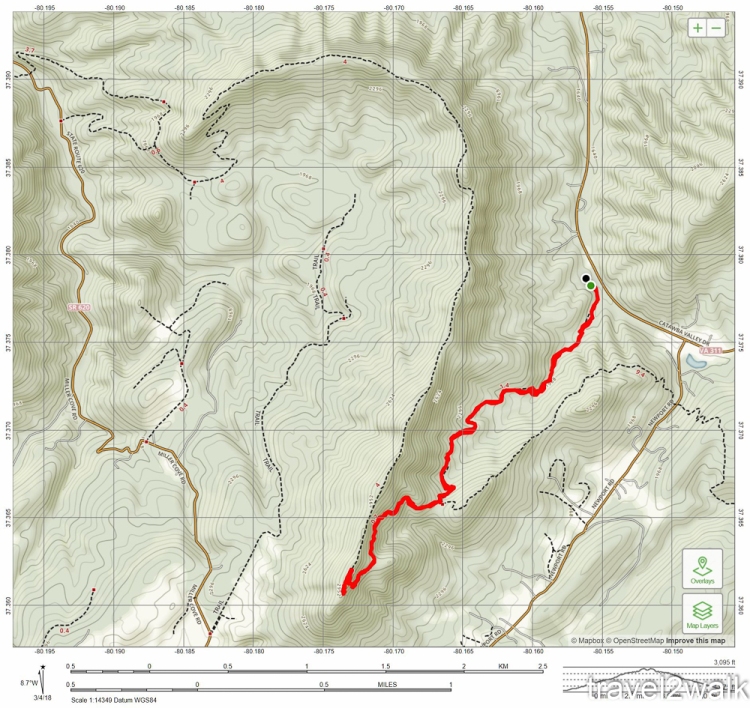 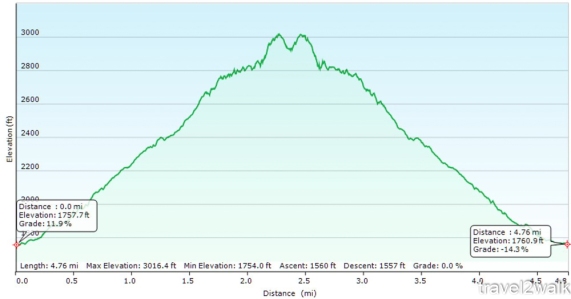 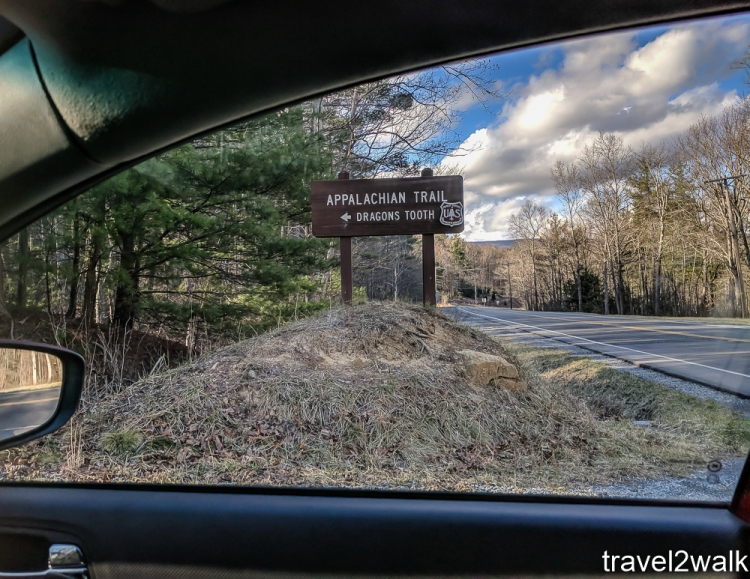 Even though the parking lot is large, it will overflow onto the road on a nice weekend day. There is a trash can and restroom at the trailhead as well.

Near the trailhead there are several campsites around the first stream crossing. 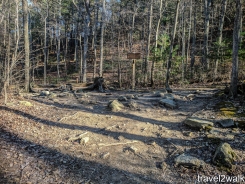 Right after the first creek crossing, you’ll reach the junction for the Boy Scout Trail, which I’ll cover below. The Dragon’s Tooth Trail turns right. 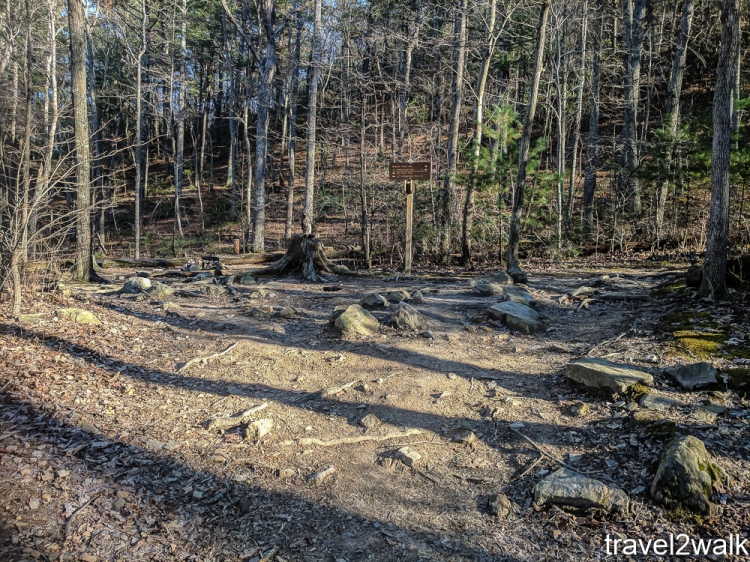 The trail will cross the stream a couple more times

before the Dragon’s Tooth Trail starts to slope upwards through the forest and up the drainage. I like the view of this section coming down as you’ll get a few nice sweeping views of the forest in the valley.

After a last set of switchbacks and 1.5 miles from the trailhead,

the Dragon’s Tooth Trail connects with the AT at Lost Spectacles Gap. There are some that make their camp here at night. Turn right onto the AT to continue the last 0.7 miles to the top of Cove Mountain and as the warning sign says, there is some scrambling upcoming.

The immediate section of the trail consists of a mix of trail, rock steps, and with a few boulders to skip on top of or around.

Iris & Marije joins us on the cold Janurary day in 2015

Cool icicles in Janurary of 2015

When you reach a section of the trail where you’ll have to scrambling on a few vertical slabs, you’ve reached the final section to reach the top and the most difficult scrambling section. 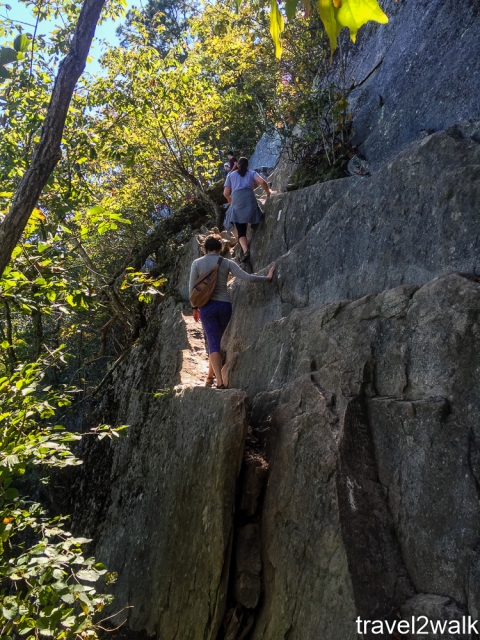 Before continuing on, you’ll also get a nice view point here.

before switching back on the final push to the up the rock face. Without the leaves, you can actually see the rocks that make up Dragon’s Tooth at the switchback point. 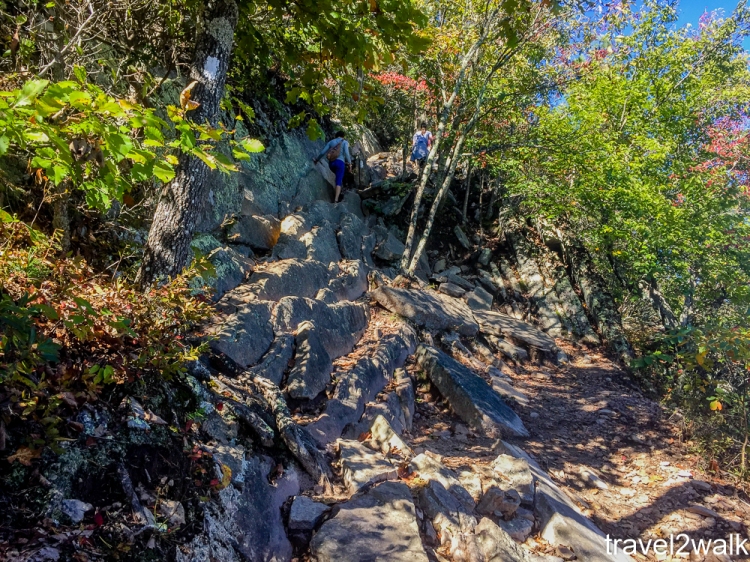 At the top of the climb, you reach the summit of Cove Mountain. The AT will continue southbound along the spine of Cove mountain to the right, but you’ll want to turn left on the short spur

to reach a couple large outcrop of rocks 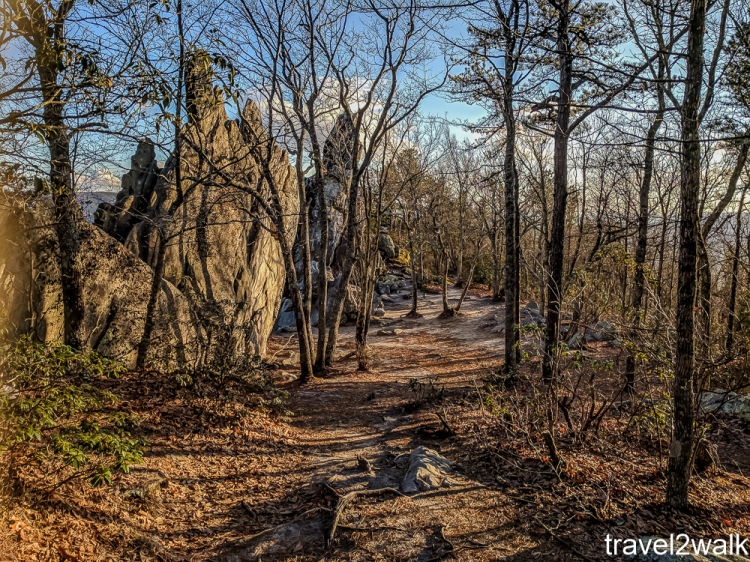 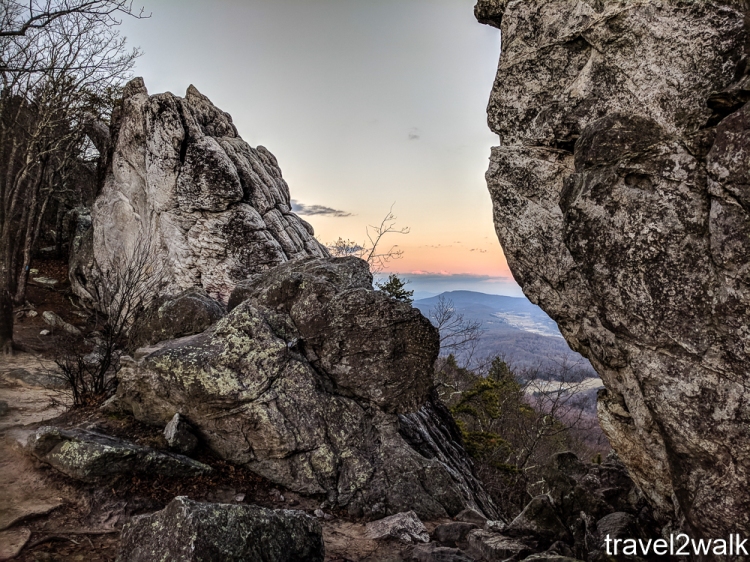 However, the climax of the hike still lies ahead at the top of the tooth. Work your way around the far side (south) of the rocks and turn left toward the backside of the rock where it opens up. Here you’ll see a couple of gaps between the rocks. One sets up an awesome framing for the Catawba Valley. 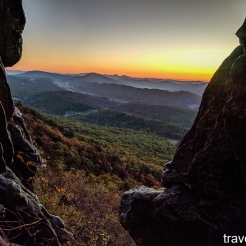 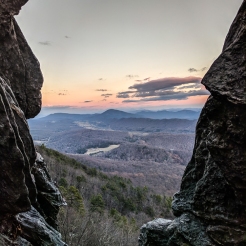 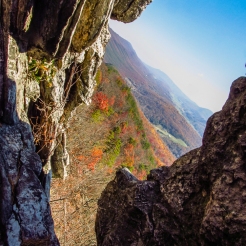 The other gap is where you’ll scramble up.

There is a nice ledge here to take in the views, though it can get very crowded on a nice weekend.

traffice jam on the tooth

If you are good with some exposure, there is the top of the tooth you can climb for a 360 degrees view. 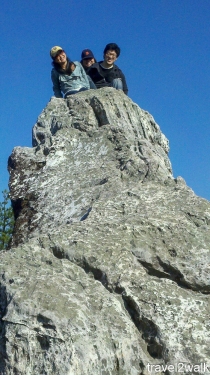 For me on this February evening, it was to catch the sunset,

though the pink sky over North Mountain, Tinker Mountain, McAfee Knob, Catawba Mountain, Bushy Mountain, and Fort Lewis Mountain (from left to right) is the preferred view from the top. 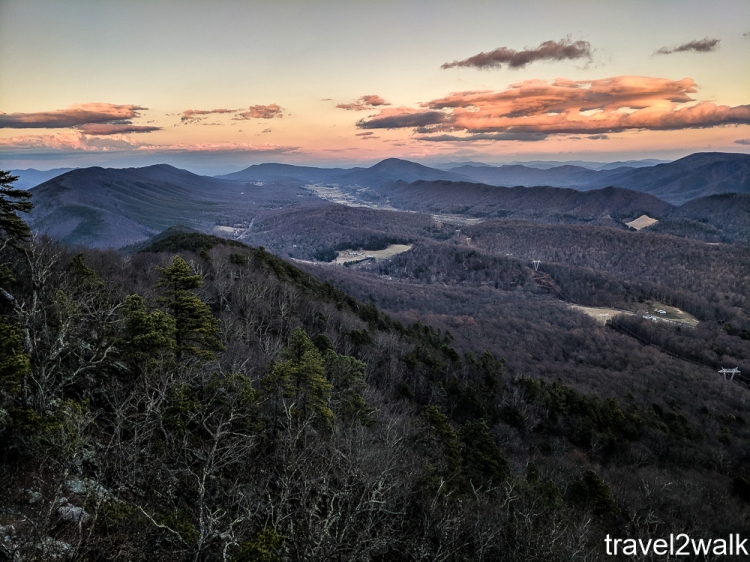 Over the years, I’ve been up here many times. The following are some of my favorites reflecting my favorite times to hike up there such as sunrise and peak foliage season. 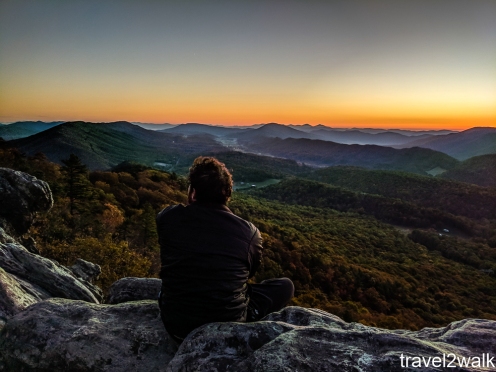 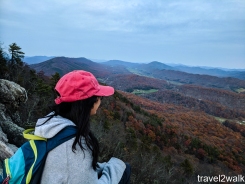 Other than the tooth, there is a second spire you can scramble up as Drew does here. It’s a little more difficult scramble up to that spires,

but it does provide for a better point of view to take a picture of the tooth itself.

Do be vigilant while returning as scrambling downwards is usually more difficult than upwards. For the return to the Dragon’s Tooth parking lot, you just have to back track on the well signed trail including that of Lost Spectacles Gap, where you turn left off the AT and onto the Dragon’s Tooth Trail. 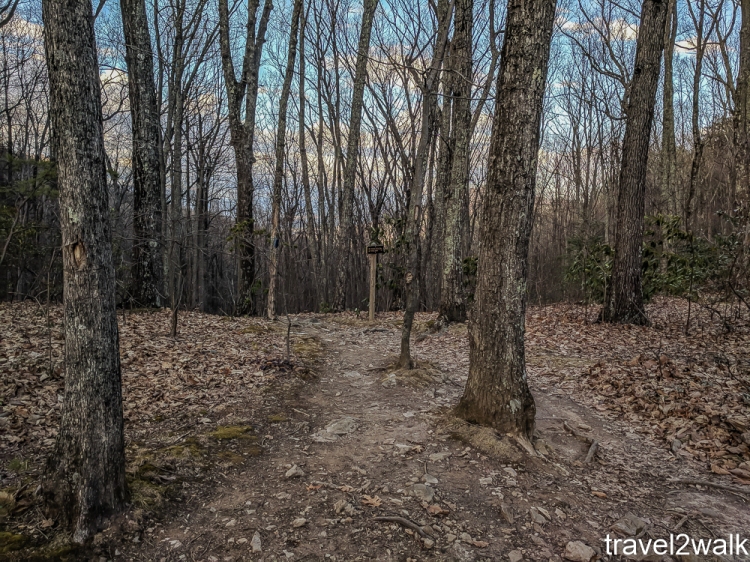 The Boy Scout Trail shares the same trailhead and parking lot as the Dragon’s Tooth Trail, but branches to the left after the first stream crossing.

After passing a few more camping spots, the Boy Scout Trail then starts an aggressive, climb over a few switchbacks to meet up with the AT.

There are several camping spots along this section of the AT as well, but with no water access.

After gaining the ridge, the trail continues with a few ups and downs consisting of interesting rock formations to scramble over and 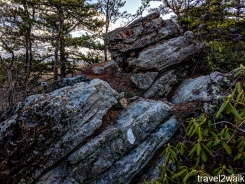 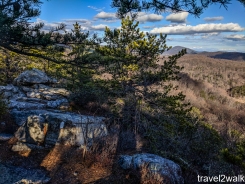 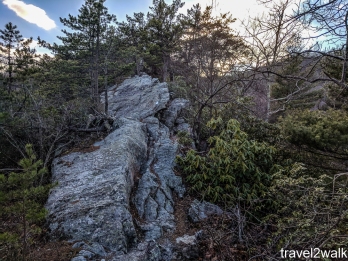 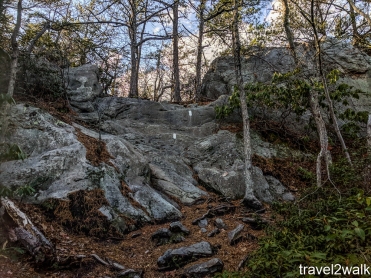 overlooks including Rawie’s Rest. The Dragon’s Tooth trail is coming up this drainage below.

The AT hits a peak before dropping down a switchback to the junction at Lost Spectacles Gap.

From there it’s the same route as above and I’d recommend going down back to the parking lot via the Dragon’s Tooth trail to make it a loop.

The first time I hiked up to Dragon’s Tooth was actually using this route known as the “Back way to Dragon’s Tooth.” It was with the Roanoke outdoor meetup group, but rather than ending at Dragon’s Tooth Parking lot, we did a 17 hike all the way to McAfee Parking lot on the AT. I wouldn’t recommend the AT section from the Boy Scout junction to McAfee to anyone since it is just through a tunnel of trees.

The last time I hiked this was 6 years ago, so I don’t have a tracking of the hike. But the trail is indicated with the blue line below and you can find the trail information from the Roanoke Appalachian Trail Conservancy. 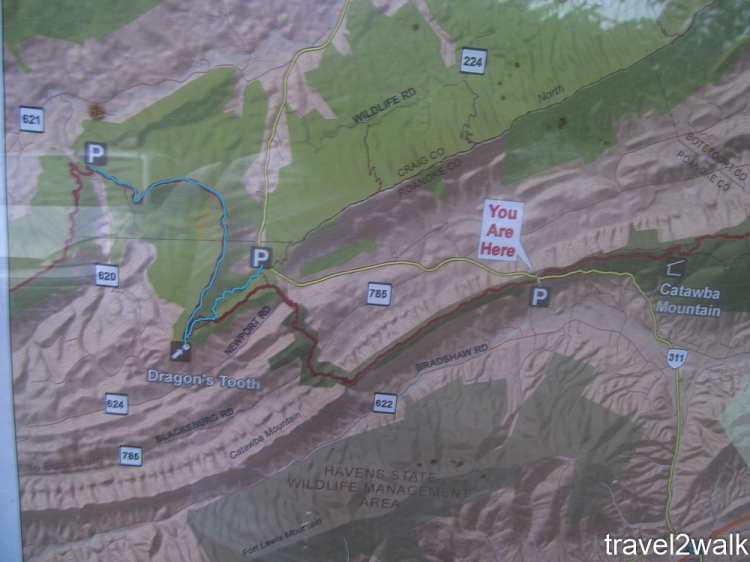 The hike starts at the location where the AT crosses Miller Cove Rd. (VA-620) with Trout Creek running along the road.

Take the AT north bound and the trail will start to slowly climb. After passing an area of burned trees and the Pickle Branch Shelter, the trail starts to ascend more rapidly and will switchback to gain the ridge of the Cove Mountain Chain. Once the ridge is gained, there is a nice outcrop looking at the backside of North Mountain.

The AT continues along the ridge rocky ridge of Cove Mountain.

Some of the rocks were in particularly interesting formation standing up.

It definitely wasn’t an easy portion of the AT, but reached another vista

before arriving at the spur for Dragon’s Tooth. 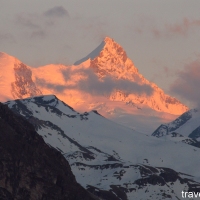 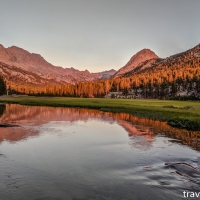 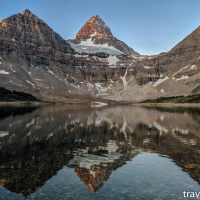 May 2022. Mt Baker mountaineering course team (minus @megmargaret7839 who took the picture) with @alpineascents. Thanks to our instructors and guides Tommy, Rachel, & @matt.hallstead.
National Mall, Jan 3 2022. A benefit of becoming a Washingtonian is being able to see the capital like this with just a 15 minute metro ride.
Explore Park, Roanoke, VA - Dec 16, 2021. Leash training for our younger cat, Shadow, has begun. The trails along the Roanoke River as part of Explore Park were good training grounds as they weren't busy and wide. The river views weren't bad either.
Mt. Mansfield, Vermont - Oct 2020. We returned to the highest point in Vermont last year to visit a friend and pod with them. While the peak didn't meet the memory I had from a previous visit, the way up and down were well worth the hike. A instance was on the Sunset Ridge Trail where the light was shining through the clouds. you can find our full hike report via link in profile at @travel2walk or at https://travel2walk.com/2021/11/10/trip-report-vermont-mount-mansfield-october-10-2020/
Hellroaring Creek, Yellowstone National Park, Wyoming - June 2021. Starting to organize some photos and found this one of a few elks in Yellowstone. A teaser of what's to come... Just the tip.
George Washington National Forest, Virginia - November 6, 2021. The Massanutten Ridge parallels the popular Shenandoah National Park, but shares many of the same views with less crowds. Our short hike up to Copernicus Ridge viewpoint was a perfect hike in training our cat, Babou, as we didn't see another person. The view points weren't bad either with the current foliage.
Jefferson National Forest, Virginia - Don't let the chilly weekend stop your adventures into the colorful Virginia forests. Peak foliage is still going on, especially here along the Apple Orchard Falls trail.
Jefferson National Forest, Virginia - November 2, 2021. Unexpected rain out for our planned sunset hike, but a easy strolling along Roaring Run with the peak foliage was a decent consolation.