We had to change our original plans for July 4th weekend due to injuries preventing us from doing any backpacking or too much hiking. Though we did still want to get outdoors, so we got out to Shenandoah for a Friday hike. Have to get rid of that steak, hotdogs, and beer somehow. #merica

Shenandoah National Park, unlike the Jefferson & Washington National Forests in southwest Virginia, is a national park. While this hike starts outside of the park with no specific location for the park to collect entrance fees (Shenandoah National Park), it is expected for you to have paid if when you are in the park. If you run into a ranger, they might inquire about it. With the heavy traffic of visitors to Shenandoah, it is very much needed to up keep with infrastructure. I would also recommend to get the America the Beautiful Annual Pass for USD$80, it usually pays for itself if you visit 3 national parks.

This hike also has several variations with different starting points. In preparation for our hike, I referenced Hiking Upwards. I made the decision to avoid the traffic on Skyline Drive and looked for a moderate distanced hike to allow us to test our injuries. The option to start this hike on Skyline Drive is a bit longer at 11 miles (alltrails).

Another alternative is to enter via Chrisman Road (VA659) into Heiskell Hollow as described in Hiking Upwards. This variation replaces Beecher Ridge portion of the hike with Heiskell Hollow, which may be more interesting.

The weather called for a humid day with the possibility of afternoon storms. This is why I decided on a hike that is said to be known for its streams. Also why we tried to start a little earlier getting to the trailhead just after 10am. The trail starts on a brief private road walk, so you must park your car on the shoulder outside the marked lines before the dirt private road. There was only couple other cars when we started, but the place was overfull by the time we returned around 2pm since there is a popular swimming hole on Overall Run close to the trailhead. 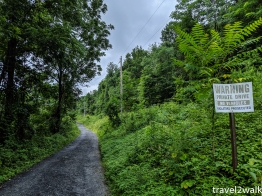 Many more cars later in the afternoon. 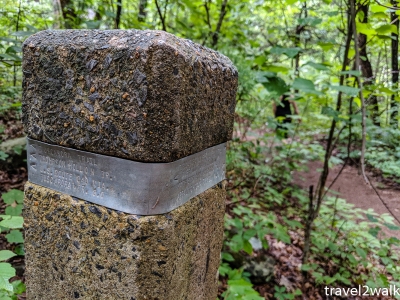 We decided to hike the loop counterclockwise as we preferred to hike up steeper terrain. It wasn’t long before we were next to Overall Run. We followed it for the next mile of so with a slight elevation gain at about 5.7% grade.

Along the way we crossed Overall Run a couple of times. During our second crossing, we saw was the large number of centipedes on a log in the middle of the stream, stuff nightmares are made of. 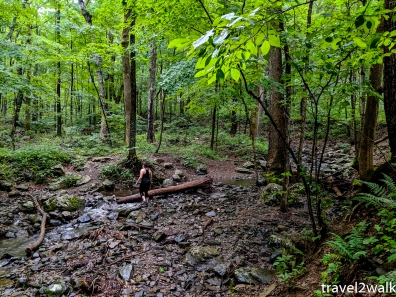 After open an flat area with a few good camping spots at about 2.25 miles into the hike,

the real uphills begin. For the next half mile the trail gain elevation aggressively at about 21% grade. I was drenched with sweat by the time we came to a big flat camping spot.

A few more steps uphills, we came to the outlook of the Overall Run drainage.

Also among the outcrops here was view of Overall Run Falls.

Throughout this next half mile section, the trail continued to climb aggressively with an average of about a 13.1% grade but it was broken up to view points and a views of the cascading Overall Run. We ended up playing around here a little bit, which explains the low average grade.

We actually had this one to ourselves as it was a little bit off the trail and took some scrambling on wet rocks to get down to. So know the risks if you try to get down to this hidden cascade.

The outlet also formed a nice swimming hole, though I never really trust the water here in Shenandoah that much since I know major campgrounds and Skyline Drive are on the crest of the mountain.

We returned to the trail and came to the Upper Overall Run Falls a little further up. It seemed like the popular spot full of hikers coming down from Skyline Drive. It looked like there may be a way to possibly scramble down to the falls, but we didn’t look around that much. 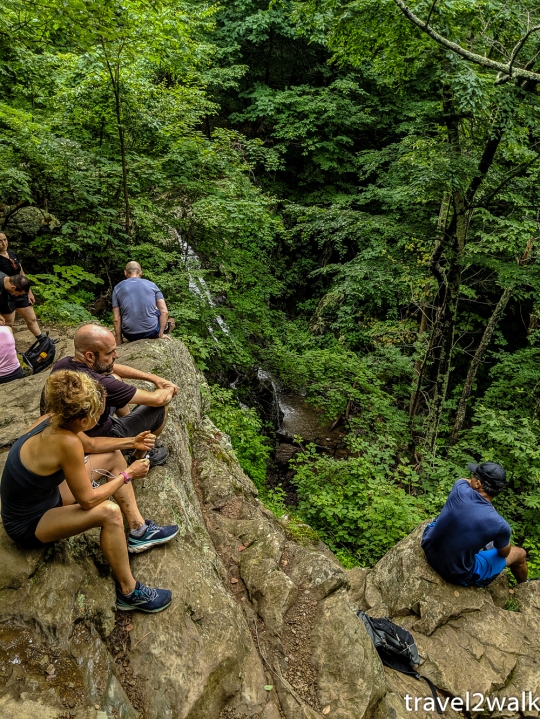 At about 3.3 miles into our hike, we came to our next trail junction turning right on the Mathews Arm Trail.

We stayed on Mathews Arm Trail for about half a mile of flat terrain before reaching the junction to the Beecher Ridge trail branching off to the right. The Beecher Ridge trail is said to be a popular hangout spot for bears, but I we didn’t end up seeing any. I broke my bear sighting streak on Shenandoah hikes. Instead it was about a 2 mile long descent at about -9.6% grade through the forest and bush. It wasn’t overgrown, but there are areas where the bush encroaches on the trail. One of these bushes did have some stinging nettles in them. 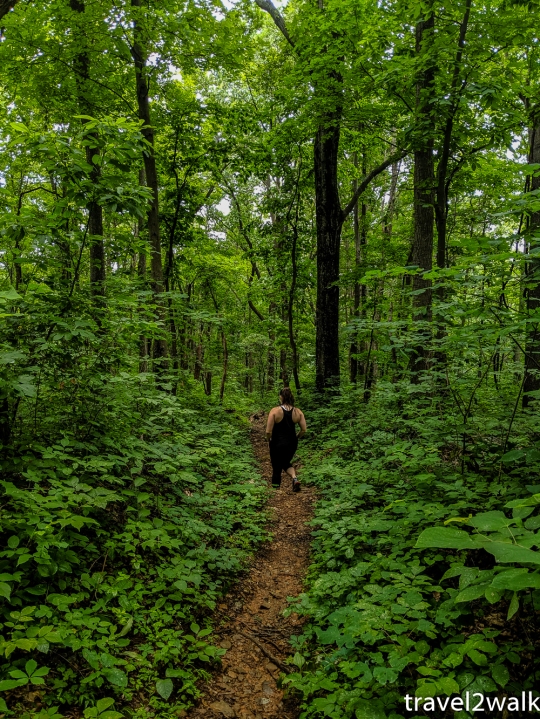 There are sections where the bush is very light leaving just a wooded area with plenty of visibility. So I can understand why bears might be sighted easily here. The Beecher trail itself wasn’t very interesting. About 6 miles into the hike, we arrived at the next junction. The trail branching off to the left connects with the Heiskell Hollow trail, the variable of this hike I’d probably recommend over the Beecher Trail. We continued forward to continue on our loop.

The trail got steeper as we finished our drop down to Overall Run over the next 2/3 of a mile. The average grade continued on at about -9.5% for the first third before going to -21.2% in the last 3rd. My knees and quads were happy when we reached the stream again.

After crossing several tributaries of Overall Run, we came to another junction. The direction to the left has the Overall Trail seem to lead to Overall Road and perhaps eventually to US340. Openstreetmap isn’t clear about if that road is another possible starting point for this hike.

The walk for the next half mile was a relaxing one next to the stream passing a camping spot, couple of small swimming holes and pour overs, and an interesting rock section. Part of the trail here seems to be the former stream bed with the water walled off by some rocks to make the trail. 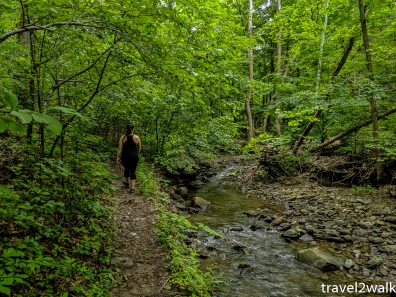 Right before our final junction to return to the car, we start to hear children’s playful screams. We were at the popular swimming hole and probably the reason for the full parking lot when we returned. This was about a mile from the parking area with plenty of people chilling in the swimming hole or on the rocks.

With the hot and humid day, the swimming hole near the end was nice. But with so many people and our stomachs growling, we didn’t stay around for too long. 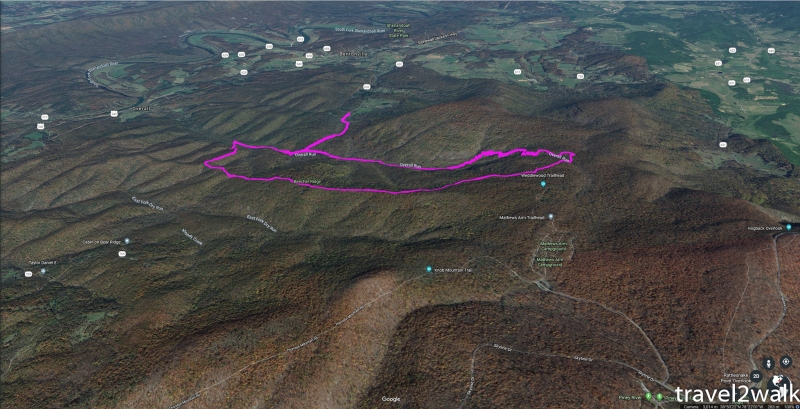 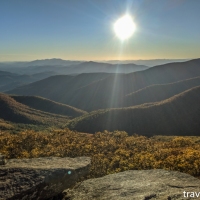